Cyber Monday stands for the start of Christmas sales in American online Shops. By now it is also celebrated in Europe. Millions of customers virtually bombard the salesmen with purchases. Many of them could not access their accounts to pay yesterday, due to an IT-meltdown at the Royal Bank of Scotland. According to The Guardian there were massive customer protests in social media. 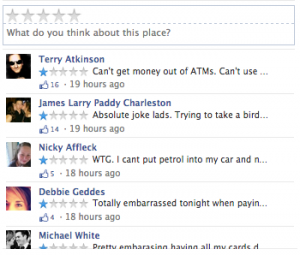 What I find quite interesting is, how less a deactivated “Posts by Others” section helped the Bank on Facebook to circumvent the social media backlash. Instead of writing time-consuming comments, numerous users just rated the bank with one star of five. This takes a split second. Brought to you by the new rating function of Facebook. And it shows: Social media firestorms are like water. They find their way.

So I would like to kindly add to Graham Jones: Yes, convenience in the online sphere is important, this is about doing the right thing. But the Facebook rating is also a convenient function for giving feedback on the online space of The Royal Bank of Scotland. And it led to a bad result for bank. So companies can focus first about doing the things right – which is delivering their core service and meet the customer expectations. Only then a convenient online space can unfold its true potential.